Since 1993, I have been presenting workshops internationally using a series of line-art images around the concept of Square Wheels. They can represent things that work but that do not work smoothly and they beg the question about what round wheels can replace them. Users and audiences consistently tell us that this is the best metaphor for organizational improvement or personal growth that exists anywhere. 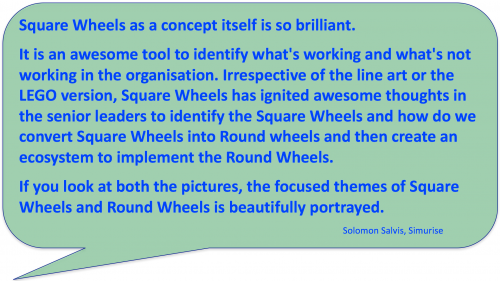 Generating the understanding that Square Wheels represent how things really work is incredibly easy and people get the concept readily. Cognitive dissonance then becomes one of the driving forces underlying the subsequent generation of Round Wheel Ideas for Improvement. The gap between the impact of the SWs provides motivation to decrease dissonance and improve the idea.

The controversy exists between our use of the old line-art drawings by Roy Sabean and the newer LEGO scenes, as you can see below:

We did a short online survey of users and the reactions were split as to which image was preferred. We asked our LinkedIn network as to their reactions and the feedback was also split. Some people prefer the old image and some prefer the new one, and there are a number of factors that underly this split.

People who prefer hands-on kinds of experiential exercises might prefer the LEGO, since they can bring the metaphor into connection with other elements or frameworks like LEGO Serious Play®. Others prefer the line art for its elegant simplicity. Other people’s reactions are mixed.

I do not think that there would be actual differences in application and usages, which can include facilitating innovation and creativity, aligning goals and values, generating active involvement and for coaching workplace improvements. We have extensive experience with both and they work seamlessly.

Facilitating discussions of issues and opportunities can also function as a team bonding or even a team building process if one then uses the discussions as an impetus for planning and then implementing new ideas.

The LEGO versions make generating stop-motion animations an easy and interesting process and we have a workshop design to use phones and inexpensive animation software to capture storylines around process improvement. The LEGO scenes make for more colorful posters and worksheets.

We would love to have your comments on the different approaches and we will send you one of our LEGO animations in exchange for a comment and signing up to our blog. Your input would be valuable and useful,

Dr. Scott Simmerman is a designer of team building games and organization improvement products. Managing Partner of Performance Management Company since 1984, he is an experienced presenter and consultant who designs simple, powerful learning tools.

You can reach Scott at [email protected]
See his poems and performance haiku poems at www.poemsontheworkplace.com 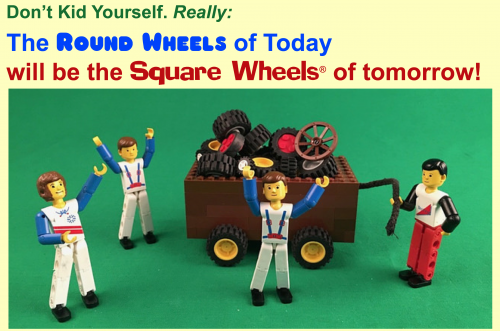