You CAN herd frogs! Thoughts on Strategy Implementation

A key role in leadership is one of implementing change and implementing strategy initiatives. And there is a lot of evidence that this is not done very well in many organizations. Research by thought leaders like Robin Speculand tend to show that most initiatives are unsuccessful when viewed objectively. The video on his site today is by Chris Skinner and is about why implementation fails in banking. (click on the names to go to the sites)

This simply reminded me that:

Getting things done around here is a lot like herding cats.That old EDS commercial about the satisfaction gained from successfully herding cats was just a hoot, where the cat herders talk about their accomplishment in a 1-minute video you can access by clicking the image below:

My British friend and associate, Barry Howell, used the phrase “herding frogs” in a conversation we had, so I played with that in a previous blog you can see by clicking on the image below. I thought the notion of herding frogs was pretty funny, but NOW, I am convinced that there is a Leadership Lesson here.

Before I get to the Leadership Lesson and Team Building Exercise I will share, let me first say that animals can be herded, just not all of them. View the following video for 30 seconds or so before I make my point below: 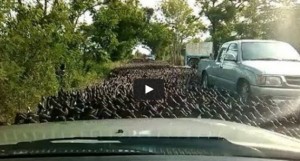 Stampeding the herded team of ducks.  This is obviously a common event at this location. And that first team of ducks sure had their act together. But it you watch it longer, you might have seen that not all the duck teams were very effective. In some cases, hundreds of the ducks were just standing there or muddling around, seemingly without a clue. (Yeah, that happens in organizations, too.)

I love using those kinds of very visual, kinesthetic phrases to anchor reality.

So, here is your training activity, as promised.

Barry sent me this link to a video of people who seem to have the task of “Herding Frogs.” Obviously, that is not an easy one and the people are seen to fumble and stumble a bit. They also have to deal with the mud, which is something that certainly happens in most organizations as I show in my old Square Wheels Jeep Mud cartoon from our team building game on optimizing collaboration:

So, here is what you do:

Show this video on The Great Frog Roundup to groups of 5-6 people at a table — note that there can be any number of tables.

After watching the 3-minute video, ask them a few questions and allow them to discuss the issues of implementing the strategy of herding frogs along these lines:

My take is that the overall goals were to catch some frogs, but what was the purpose? It appeared that they did have some kind of net on the beach but that they could have used more boards and maybe even built a funnel to move more frogs into the same area for capture. Using buckets might not have been the best idea, since they could actually suffocate frogs if filled too high.And so forth.

Lastly, what IS it about frogs and ducks in outrageous numbers, anyway?

And those kinds of things that would help people to understand that while herding frogs is a difficult task, it CAN be accomplished and results can be improved. 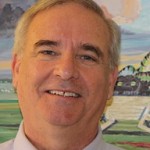 Dr. Scott Simmerman is a designer of team building games and organization improvement tools. Managing Partner of Performance Management Company since 1984, he is an experienced presenter and consultant and trying to retire!

Scott’s blog on Poems and Quips on Workplace Improvement is here.