Your Brain – Use It! And some thoughts on how it works

It has been an interesting week and a couple of things prompt me to write a little bit about behavioral neurophysiology and perspective and learning /change.

Playing pool, one of the lower-ranked players was practicing by throwing balls on the table and making shots, while I had a couple of marks on the table and was taking the same exact shot over and over again, making the ball and putting the cue ball where I wanted it to go. The funny thing was that he was looking at me like I was crazy, not at all understanding that the brain learns through repetition and the body learns through motor memory and doing the same thing over and over makes it all come together. He continued to “practice” by doing a continuing series of different shots and strokes and speed.

Then, the conversation turned to some other things and he said the old, “We only use 10% of our brains.” Actually, we use ALL of our brains, but only use 10% of the capability, but do not hold me to the actual number. But the conversation did turn into one of, “How can I improve?” and I talked a bit about learning and structured practice and the like. I think he left thinking he thought differently — time will tell. It IS more fun to just shoot and pocket balls, but that will not improve your game nearly as much as some structured practice.

Then, I come home and pick up Smithsonian Magazine’s July / August issue and there is a one pager by Laura Helmuth called — and I think it is pretty funny — Gray Matter. (That is what we call brain tissue if one is into physiology, but I can never remember if it is gray or grey. Guess I will have to look that up one day…)

She gave some statistics:

There is obviously something going on up there in the head of most people if all that energy and blood is going to the brain, even though nothing is apparently moving. The brain actually gets about 25% of the normal blood flow, and even more if the body is dropped into ice cold water, where the skin blood flow and much of the muscle flow is actually stopped or very much slowed.

Woody Allen called the brain his second most favorite organ.

And I thought that it was really funny to read that 10 is the approximate percentage drop in accurate recall of random letters when one is chewing gum! I knew that chewing gum really looks stupid, but there is a study at Cardiff University showing that it actually makes you stupid? Neat! That confirms a theory I have had for a long time!

(Here is another neat factoid — 50% of the time, human volunteers can successfully recall a sequence of 5 numbers presented briefly on a computer screen. A chimp named Ayumu can do that same task at 80%, but probably not when chewing gum…)

Yeah, I got one of those doctorate things in the mid-70s in that brain / behavior stuff and it has helped me to understand a little about how people think and how to improve their performance. I’ve spent a lot of time in the area of human performance results improvement, and like the things that are simple and useful, like this article on HighPerformanceTeamFlow — how you can structure an environment that better enables people to perform.

We deliver Square Wheels cartoons so that people can, “Step back from the wagon” and look to see what possibilities exist for personal and organizational change to occur. We deliver this in groups, so that we can generate both the ownership of the ideas as well as some peer support for improvement and collaboration. We mostly work on workplace improvement, since that represents a big opportunity for most organizations, and it betters the lives of people within those companies.

And we also do a lot with teamwork, getting people to better understand the choices they make and the alternatives that are available. By making things fun, we can engage some of the creative space that has been unused by so many people and also use that team support to increase involvement and dis-un-empowerment.

We all have parts of our brains that we don’t use a whole lot. But we can engage in more teamwork, thinking about possible changes and improvements, and generating better thoughts about how we can play in the future. Some structured practice, some fun and commitment, and improvements are possible, for sure.

Just give up on that gum chewing, will ya?

Written, just for the FUN of IT! 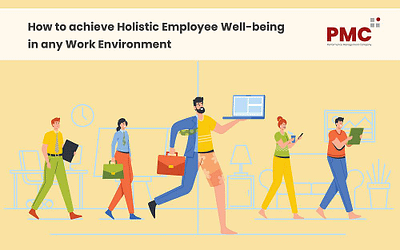 How to Achieve Holistic Employee Well-being in Any Work Environment

The COVID-19 pandemic has drastically changed how people live and work. Organizations need to look...